Your guide to real estate in Istanbul Kagithane, Let us help you to find your best property in Turkey.

Kagithane used to be another working-class area of Istanbul. However, recent decades have witnessed a complete makeover of this district into a higher-end area ripe with luxury homes and entertainment options. Its central proximity to greater Istanbul means that residents have access to a wide range of transportation options, which has literally transformed this district, giving it a unique identity. There are continually new residential and commercial real estate development projects under way, so this is a prime area to consider investing in Kagithane.

Formerly part of the Sisli district, this neighborhood on the European side of Istanbul is undergoing rapid urban renewal. Its proximity to the city coupled with its strategic importance to several huge transportation projects have made Kagithane a hub of new development. The construction of the third airport and the opening of the Eurasia Tunnel have both influenced a period of focused progress in the district. 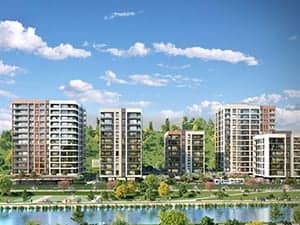 The region has a rich and storied history which dates to the time of Suleiman the Magnificent. It is bisected by the Cendere, a stream that empties into the Golden Horn, and this is where the court would gather to hunt in the adjacent forests. Over time, the area then called ‘Sadabad’ hosted festivals and other forms of popular entertainment. By the 17th Century, splendid mansions and palaces were being built in what was then a verdant valley. The tulips that marked this peaceful phase in the history of the Ottoman Empire abounded in the surrounding fields.

The 1730 Patrona Halil Revolt brought an abrupt end to the Tulip Period and much of the region’s magnificent architecture was destroyed. The region would not be settled again until the late 19th Century when it became an important industrial zone for an ever-expanding Istanbul. “Kagit hane” literally means paper house, and the district gets its name from the paper factories that sprang up along the shores of the creek. Thousands of Anatolian migrants came to work in these factories and it soon became a densely populated shanty town.

Kagithane’s noble past is being revived with the completion of several multi-purpose developments that combine office and commercial building with modern residential complexes. The illegal settlements have been swept away on a tide of urban renewal. Shopping malls, hotels, hospitals, educational campuses and mosques are all thriving in a district that’s embraced investment in modern infrastructure. A new Metro rapid transit station is due to open in 2019 and two major highways leading to the Asian side of the city cross through the district.

With its towering new buildings, modern conveniences and prime location, Kagithane is fast becoming a jewel in the crown of contemporary Istanbul.